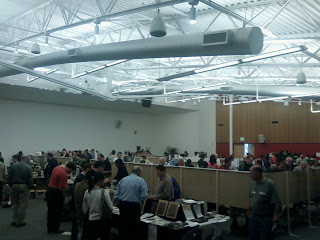 Stuff for sale, some really great stuff on display. More pics in the Picasa gallery after I get back.

I missed breakfast this morning after being wiped out by that early flight. Spent the whole day in the CHM, watching the talks, checking out the exhibits and shopping the marketplace. The need to fly back with whatever I buy is limiting my purchases, probably for the better. So far I’ve picked up only a limited-run Atari cart and an HP calculator power supply. Jason Scott showed clips from his upcoming documentary and spoke for nearly three hours on a variety of entertaining subjects, with the conversations following him out into the hall as the CHM shut down for the night.

Dinner was a two-part affair consisting of two stops at two different In-n-Out Burger locations. The first one wasn’t enough. We drove up and down Hwy 101, took a quick tour of downtown San Jose, and returned to the hotel early. After having only one real meal today, I’m going to make that breakfast in the morning.