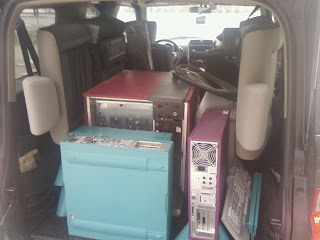 Operation Crimson has ended. Bounty collected is as follows:

I think that’s a fair trade-up from the O2. It’s monstrously heavy, but, assuming it works, I have now been mired another step deeper into the pit of vintage computing. Now to get it hooked up to something that can read those old tapes I’ve been storing for years. Wonder if there is any Windows software that will support it?

I don’t go back to work for another two weeks, so sometime soon I’ll be sorting these machines out and figuring out what I have. The I2s will likely be traded off if they’re of lesser spec than the ones already in the collection.

One thought on “Christmas SGI Haul”